reindeer really know how to fly

Because, see, I thought I was the Best Girlfriend Ever. I got the Boy a Wii! At great expense, from a secondary retailer! With an additional remote, so I can play, too!

Good thing my cell contract with Sprint ended a couple months ago, eh?

*freaks out some more*

Merry Christmas, dear reader. I'm off to Warm 'n Cheerful tomorrow, even though I'm not quite done yet (see relentless paper second draft, supra). But soon, very very soon.
Posted by ^kat^ at 1:46 AM No comments:

Email ThisBlogThis!Share to TwitterShare to FacebookShare to Pinterest
Labels: holiday

Ok, so I totally lied about taking my test tomorrow (er, later today). It's gonna happen Weds morning. Grr arrgh. I want to be done with it, but I don't want to stumble into it without confidence.

And as a result, I decided to watch this instead of finishing the Dagher decision, and good heavens, does this dude have some editing skills:

Email ThisBlogThis!Share to TwitterShare to FacebookShare to Pinterest
Labels: r.e.m.

hold on to these moments as they pass

...that's about all I've got in me at the moment. I've spent the day at Starbucks outlining Antitrust in the hopes of taking that exam tomorrow, because I still have that second draft of a paper to finish before I leave for the holidays bright and early Thursday morning. Damn our school calendar for taking away any hope of birthday-day fun for the second year in a row. Thankfully, there will never be another exam on my birthday, ever ever, and maybe next year I'll start to feel more generally festive before, er, December 20.

It hasn't been all sadness and attempts to monopolize, though, I swear. The Boy will be taking me to a nice restaurant on Wednesday, but thoughtful fellow that he is, he also got me a beautiful red sweater I admired recently in Anthropologie's window so I'd have something to open today. (I also got this lovely watch from my parents while I was home for Thanksgiving.)

Email ThisBlogThis!Share to TwitterShare to FacebookShare to Pinterest
Labels: holiday

but his friends call him karl

So, I may be a little behind on my work right now, but it was worth it to see Paul & Storm/Jonathan Coulton (early show) at Schuba's tonight.

I'm a longtime P&S fan, from back in the days when they were merely half of DaVinci's Notebook, but their music has gotten away from me--how is it that they have two albums out that I don't own? I walked away with Gumbo Pants, but News to Us will have to wait. And the liner notes? Are totally a who's who of people I know, famous ("Altman, gangliest of Jews") and non (Gordon!). Anyway, they were entertaining as always, playing my favorite commercial jingles ("...filled with shame--and cookie dough"), as well as some new (to me) ones ("Your Town," "Count to Ten," "Nugget Man"), and some old-but-finally-recorded ("Captain's Wife's Lament," arrrrr). And they did impressions, too, like James Taylor on fire, Aaron Neville losing his parking space at the mall... and, no joke, Michael McDonald as your server at Applebee's. This is a crazy, awesome, coincidental, so smooth world we live in.

It was my first time seeing JoCo, hopefully not my last--he's pretty awesome. Most notably, he played "Code Monkey," and THIS GIRL WAS THERE. DOING THE DANCE. ONSTAGE:

Paul commented that if someone filmed the performance and posted it on YouTube, perhaps the internet would explode? I believe it might. Watch out, kids. Anyway. We got a lot of favorites, including "I Feel Fantastic," "Skullcrusher Mountain," "Chiron Beta Prime," "Creepy Doll," "Re: Your Brains" (which I'm listening to in French at the moment), "Mr. Fancypants," and of course, "IKEA," which reminded me of my last excursion to the land of meatballs and magic, and this photo I've forgotten to post: 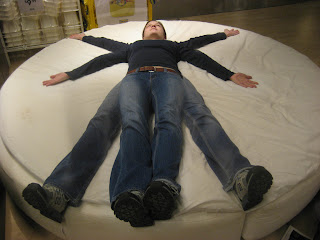 ...yeah, maybe I am the target audience for these guys. Anyway, I laughed, lots and lots and lots, and now I have to get back to the net neutrality albatross paper that's hanging around my neck. Word on the street is that there might be pancakes to be had tomorrow if I wake up early enough, so that's incentive to get this thing done in the next couple hours. If I can resist the urge to make a half-monkey, half-pony monster, that is...
Posted by ^kat^ at 12:53 AM 1 comment:

blurry even without light

I love that WOXY is including Nada Surf's "Blizzard of '77" on their Holiday Mixer, because it's totally in my Christmas playlist, too. hee. Other non-holiday-yet-holiday-ish songs on my playlist:

AFI, "Love Like Winter" (who is this? why do I have this song?)
Belle and Sebastian, "Fox in the Snow"
Counting Crows, "A Long December" (obviously)
Death Cab for Cute, "The New Year"
Joshua Radin, "Winter"
Keane, "Snowed Under"
Linkin Park, "My December" (I can't even be embarrassed about this one. I really like it... the embarrassing part was being introduced to it when Josh Groban covered it in concert. Sigh.)
The Long Winters, "Cinnamon" (This one's hard to explain... you'll have to trust me. It would be facially easier to relate if it were entitled "Nutmeg," or possibly "Vanilla Extract")
Moxy Fruvous, "It's Too Cold"
The Nields, "Snowman"
Rufus Wainwright, "Hallelujah" (blah blah Jeff Buckley blah blah)
Sarah McLachlan, "Fallen" (from listening to it in a cold car on a cold December night four years ago. I do have her holiday album, though)
Sister Hazel, "Your Winter"
Sting, "All Four Seasons" (this one led off a holiday collection I got at Bath & Body Works a couple years ago. The "Classics" disc of the 2-disc set also features Michael McDonald's "On Christmas Morning," whom I now can't think of without mentally chuckling about either the 40-Year-Old Virgin or the New Pornographers' green screen contest... but I digress)
Tori Amos, "Winter"

Also, apropos of nothing, I totally love "River." What a lovely, lovely song.

Anyway, the worst part about this Holiday Mixer is that it keeps introducing me to MORE CHRISTMAS MUSIC I NEED. I had no idea that the Dandy Warhols covered "Little Drummer Boy," but there it is, on an Indie Christmas collection that came out in September (?). I'd buy it in a second... except there are two Decemberists songs on there I already own, so maybe I should just grab a couple of the songs off iTunes? I've already bought the Killers' Christmas offering this year (mostly on the strength of this wacky video), so perhaps I should stick to the holiday songs I have...

(But Jack White has one! Nellie McKay has one! How have I not heard about these songs?)

If you're not listening to the WOXY Holiday Mixer, you should be--I've heard several favorites in the hour since I got home (including Bing and David Bowie's Drummer Boy duet, and the Fountains of Wayne/Eclectic Café staple "I Want an Alien for Christmas") and I felt so spirited that I finally put my little tree up: 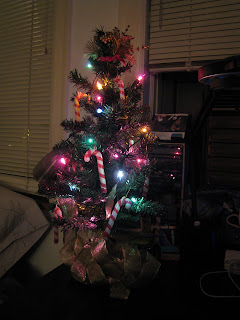 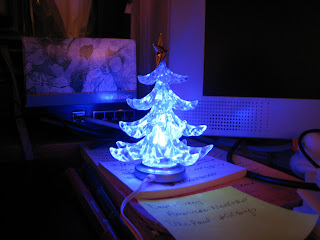 And nothing says "holiday spirit" like editing journal page proofs! Ho ho ho.
Posted by ^kat^ at 9:55 PM No comments:

fixed right where we stand

Still have to take my Ethics class exam, though. Bah. I think I should be able to MPRE-out of it.
Posted by ^kat^ at 4:06 PM No comments: