So, I have good news--Foxy came through surgery ok! I just spoke with my mom and she's apparantly very groggy and looks very sad, probably because she doesn't really understand what happened today or why she now has 23 stitches and half the mammary ducts she did this morning. The tissue is being sent for biopsy so we'll know the type of cancer and whether chemotherapy would help, but often it does more harm than good in cats, since very few types of kitty cancer are receptive to such treatment. The one concern is that because it's so fast-growing and can spread so easily that it's already taken root in her liver and lungs, so she'll be in for x-rays frequently over the next few months to make sure things aren't progressing. But hopefully we've caught the nastiness, for now, anyway. It's probably going to come back someday, but maybe not for a few more years, if we're lucky.

I'm just glad she's okay. She's seriously the best kitty ever. And yeah, every pet owner says that, but I mean it. There's not a sweeter kitty alive, and I only wish I could be there to pet her and make her feel better. 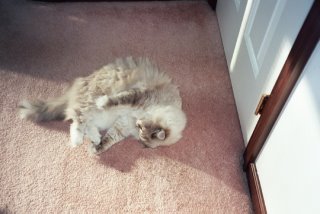