the clicking of the heels

Can you tell my trip-to-Egypt class paper is done? (Well, not really--I'm going to be fixing the citations after the Boy is done combining all of our group members' parts, and that will be a bitch, but it's not ready for me just yet.) I'm actually still listening to my shuffle, having gone to the store and back for some milk in the interim. And the great music just keeps coming. I got the Good, the Bad & the Queen, the Fratellis, new Modest Mouse, Kaiser Chiefs + Shins...

...and, of course, some New Pornographers. And I don't think Twin Cinema will ever leave my shuffle. It has assuredly wormed its way into my list of all-time best albums. I mean, it's perfect for working out, which is a key criterion for making it onto the shuffle in the first place--practically every song on the album is upbeat, or gets upbeat at some point, or has enough rhythm that I can pound an elliptical throughout and not lose pace. The songs are musically complex, rhythmically fascinating (I can never predict the shifts in "The Jessica Numbers," no matter how many times I've heard it), catchy, gloriously harmonized... I don't know how they'll ever top it, but of course, I desperately hope they will.

There's another album, though, the bulk of which also will be extremely difficult to ever swap out of the shuffle... and I say this because every time I update the shuffle I think about it a moment, and then delete something else instead. It's probably not something anyone would ever suspect, either, so hear me out on its awesomeness: the Dumb and Dumber soundtrack.

With three exceptions,* this is one of the best movie soundtracks EVER (take that, Zach Braff). But the rest of the songs? So totally fantastic that it more than makes up for these minor failings. I know scarcely anything about most of these bands--did Deadeye Dick do anything else besides New Age Girl? Does it even matter? And you haven't really had a workout till you've pumped your legs in tandem with the triumphant lead guitar chords on Too Much of a Good Thing. It's another perfect workout album, from the glossy pop of Crash to the quirky humor of If You Don't Love Me (I'll Kill Myself), or the rump-shaking Proclaimers' cover of Get Ready. Plus, as an XTC and CTD fan, the opening track makes my little heart burst with glee the moment I hear Brad Roberts's deep "Let's begin!" at the outset. I've said it before and I'll say it again: the 90s were an excellent decade for music, and this 1994 soundtrack has earned its coveted spot in my 240-song shuffle. Considering I have nearly 23 days' worth of music to choose from, that's really saying something.

Anyway. Just listening to music is a pleasure I so rarely allow myself... it feels downright sinful to sit here and play solitaire and listen to R.E.M. and Equation and Gary Jules, Aqualung, Imogen Heap and Cat Power. Cat Power! That's another album I'm loving more and more as I hear it. Plus, there's last Monday's Diesel Sweeties, which has been playing at the back of my thoughts ever since (click to see it full-size): 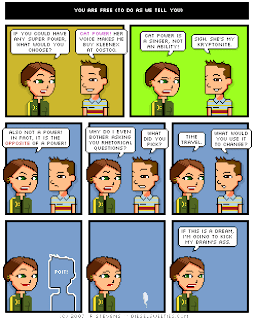 * The exceptions are track 12 (meh--I'd prefer Groove Is In the Heart, thanks), track 10 (which I honestly don't remember what it even sounds like anymore, so long ago did I relegate it to the bin), and OMG TRACK 6 (which rivals Xmas at Kmart for worst song ever). The beauty of digital music? It's as though these didn't exist and, instead, we have a perfect little 10-song soundtrack instead. Ta da!
Posted by ^kat^ at 10:48 PM

oh, man, i remember how rockin' the dumb and dumber soundtrack was. deadeye dick did have another song--"perfect family," i believe it was called--both of those songs pop into my head all the time.